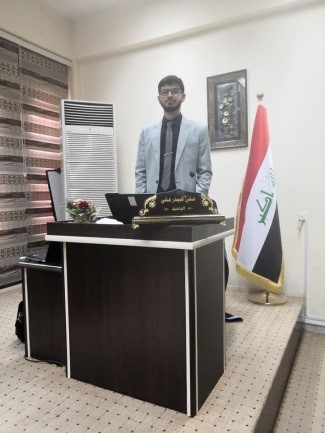 The MSc student Ali Haider Ali of the Department of Physics discussed his thesis entitled “Shape Transmission of Even-Even Ce 142-152 Nuclei in the Microscopic Interacting Boson Model”. The discussion was held at the Great Hall in the College of Science on Tuesday 15/9/2020.

The researcher stated that he conducted a comprehensive descriptive study of the characteristics of the cerium isotopes (Ce 142-152) within the first microscopic interacting boson model (IBM-1). The energy of mass nuclear states was studied using the PHINT program. Some energy levels were also predicted and the Uberm equivalence was confirmed for some cases. Additionally, the energy levels in the domain β were also predicted by estimating the energy of the second state with a twist and symmetry for the isotopes Ce 142-152.

He added that he calculated the reduced transitions probability of the electric quadrupole B(E2) and the magnetic dipole B(M1). The electromagnetic mixing ratio and quadrupole momentum of the isotopes under study were also calculated using the FBEM code.

The researcher compared the calculated results with the available experimental data and found that in general the comparisons are in good agreement with the experimental data. The isotope Ce 142 has the properties of vibrational determination and the isotope Ce 152 is very close to the rotational limit of SU (3). Whereas the isotopes Ce 144-150 have the properties of the transition region U(5) -SU(3), so they are considered first-order phase transition nuclei.