The MSc student Amir Jawad Fadhl of the Department of Physics discussed his thesis entitled “Fabrication and Characterization of Thin Films of (NiO)1-x (ZnO)x for Gas Sensor Applications”. The discussion was held at the Great Hall in the College of Science on Sunday 20/9/2020.

The researcher stated that he prepared some compounds from (NiO)1-x (ZnO)x with different proportions of zinc oxide by mixing nickel oxide with high-purity zinc oxide, then put the mixture in an oven at 1273 ° C for five hours. The resulting powders were ground and pressed into tablets. Thin films of (NiO) 1-x (ZnO) x were prepared by using the 0.1M pulsed laser deposition method on different surfaces such as glass and silicon chips.

He added that the composition of the compounds and prepared films were examined using X-ray diffraction. The X-ray spectrum showed that all the prepared compounds and membranes were of a polycrystalline structure and that the peaks were identical with the cubic phase and the hexagonal phase of nickel oxide and zinc oxide at the content x = 0.0 and x = 1.0 respectively. On the other hand, the peaks were identical for both phases at other proportions. 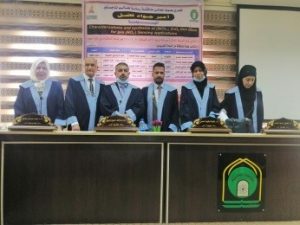