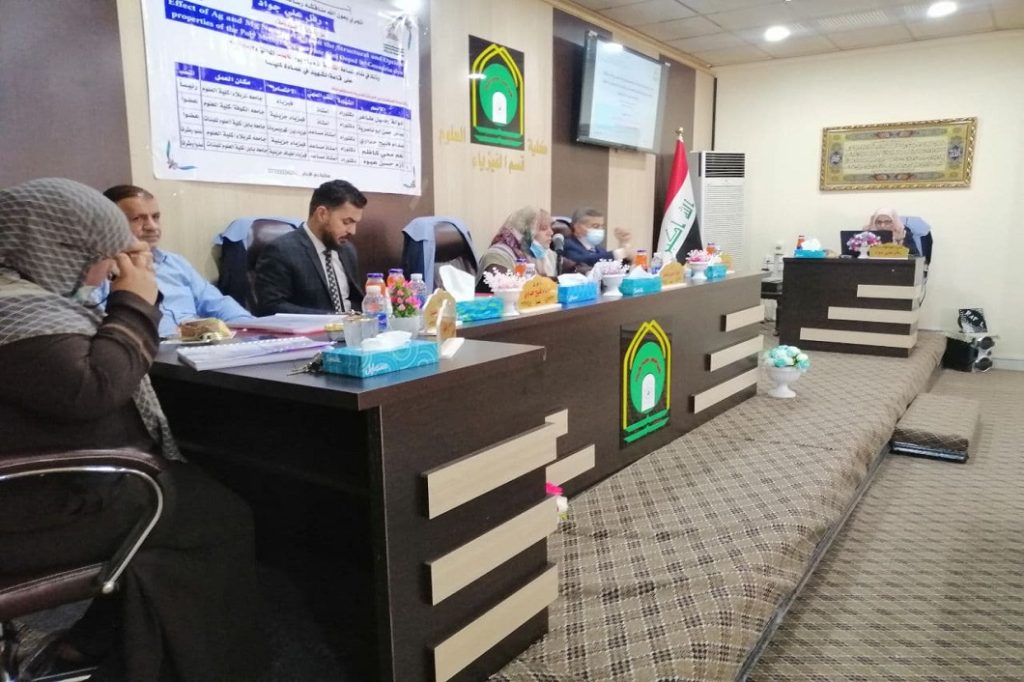 The Faculty of Science discussed the master’s thesis tagged (the Effect of Ag nanoparticles in the structural and optical properties of the PVA film doped by Methylene blue dye) by the student (Rafal Ali Jawad) and under the supervision of (Assistant Professor Dr. Nagham Muhee Kadhum) and (Assistant Professor Dr. Lazem Hassan Aboud). The aim of the study is to study the effect of silver nanoparticles (AgNps) on the optical and structural properties of the liquid (solution) and solid (membrane) samples prepared for MB dye-doped by PVA polymer (polymethyl alcohol). The knowledge of the composition and optical properties of the studied compounds also provides very important information, which makes them eligible for use in many applications, especially in the removal of pollutants from water (water purification).
Among the most prominent conclusions reached by the research, the study concluded that the maximum absorbance is achieved at a concentration of methylene dye at 7 x 10-4 ml and at a wavelength of 660 nm. On the other hand, at a constant concentration of AgNPs, and using a range of MB concentrations, the density of the absorption of the mixture of MB/PVA/AgNps was obtained due to the width of the surface plasmon resonance beam. Some linear optical properties were studied by measurements of the absorption spectra of the samples prepared before and after adding the nanomaterial, and the properties include spectra of transmittance (T), reflectivity (R), linear absorption coefficients ( αo), and linear refractive index (no). It was observed that the optical constants increased in the presence of silver indicating the effect of the nanomaterial. Moreover, the structural properties of the composite film (MB/PVA/AgNps) prepared by the casting method were studied. By AFM, FTIR, and XRD measurements at angles (37.041, 64,526)). It was also observed through the structural study that the crystalline size increased, and a decrease in the average roughness (Average Roughness) changed with the change in the concentration of the nano-material in the films. Which indicates the effect of silver nanoparticles due to their high surface area.
The study has recommended that: Studying the nonlinear optical properties of the composite (AgNps/PVA/MB). Studying the effect of some nanoparticles such as MgNps on the optical and structural properties of the PVA polymer layer grafted with methylene blue dye. The use of the compound in purifying contaminated water from organic compounds, especially after the decrease of the absorption intensity of the organic dye after adding the polymer and silver nanoparticles.