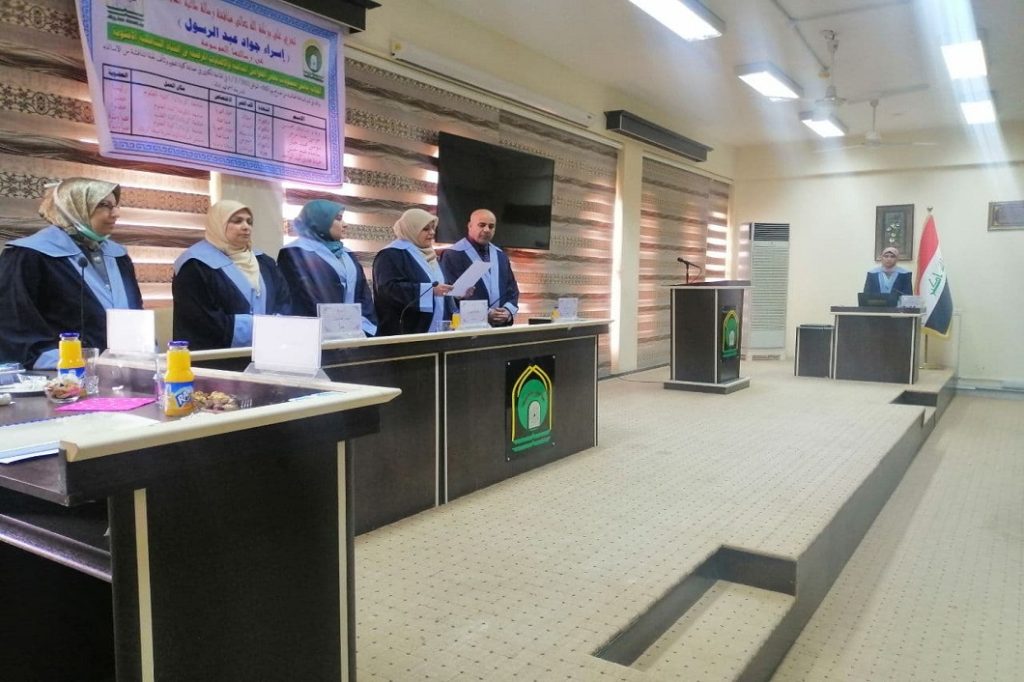 A master’s thesis in the College of Science has discussed the relationship between the levels of some immune factors and pathological infections in the female genital tract, by a student Israa Jawad Abd Al-Rasoul, in the presence of the Dean of the College of Science, Assistant Professor Dr. Jassem Hanoun Hashem, the scientific and administrative assistants and the head of the Biology Department.
The study aims to know the role of some immune factors in exacerbating the infection and thus causing more complex problems by studying the types of microorganisms present in the female genital tract, as well as their relationship to the levels of some immune factors and the extent of their impact on fertility and causing infertility.
The study concluded that inflammation of the female genital tract is one of the problems that suffer from the countries of the world, especially the developing countries, causing many health problems, including infertility, premature birth and abortion, in addition to the fact that the highest percentage of isolation of Gram-positive bacteria that were present in vaginal swabs samples was Staphylococcus. aureus bacteria, while Staphylococcus aureus was E.coli has the highest rate of isolating Gram-negative bacteria. The most dangerous types of female genital infections are bacterial infections, the aggravation of which leads to infertility or miscarriage and sometimes premature birth. The immune system plays an important role in eliminating pathogens and limiting their exacerbation through The secretion of cytokines and chemokines that reduce or eliminate the causes of infection, but the exacerbation of the immune response and the increase in the formation of immune factors, especially in the areas of infection, may lead to tissue damage and cause various complications, including infertility, and the recurrence of infections of the female reproductive system is linked to the high rate of infertility. This may be due to the negative effect caused by the exacerbation of the immune response and the visit of the production of immune factors that may have a negative role in causing infertility. Recurrent, which are close proportions and did not constitute any significant differences, but despite that, it appears that infections of the reproductive system may be responsible for about a quarter of infertility cases recorded in the current study. The role of educational level and culture acquisition in avoiding various bacterial infections and that the age groups in the reproductive stage are more susceptible to bacterial infections.
The study recommended the generalization of chlamydia examination in hospitals, health centres and gynaecological clinics because Chlamydia trachomatis is difficult to diagnose through bacterial culture by microscopic examination. Reproductive system infections and periodic review of the specialized gynecologist in order to reduce the exacerbation of recurrent genital infections and conduct frequent studies on larger samples in order to follow up the infection of the reproductive system and control this infection, if any, and use more advanced techniques such as ELISPOT and flocytometry to study the immune response At the level of immune cells and through their secretion of important cytokines such as IFNγ and TNFα.