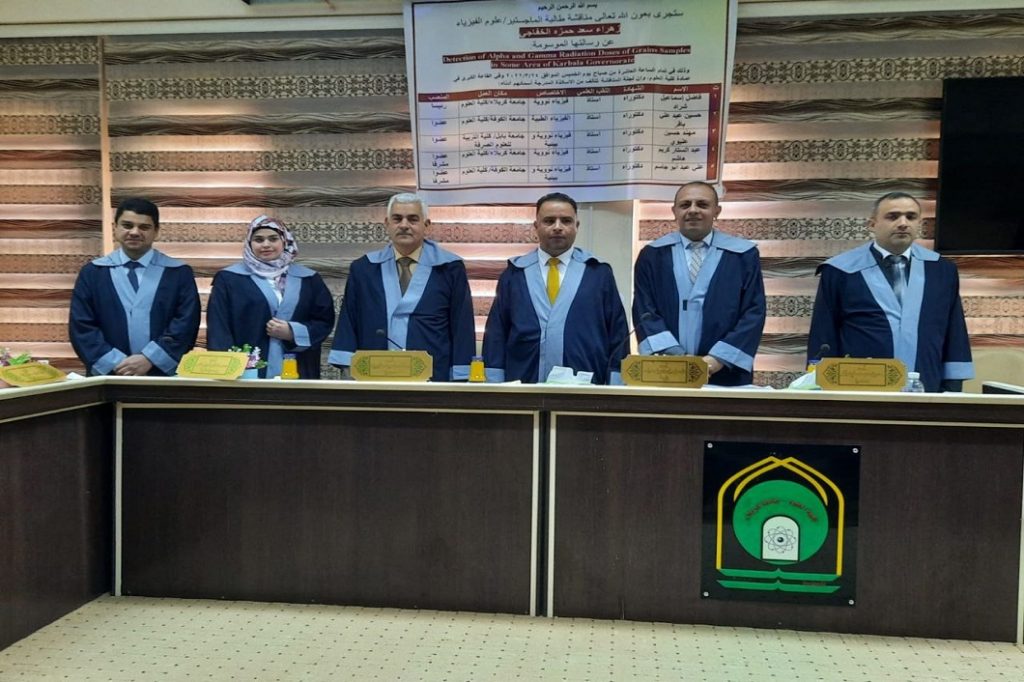 A master’s thesis in the College of Science has iscussed the detection of radioactive doses of alpha particles and gamma rays for samples of grain in some areas of Karbala Governorate by a student Zahraa Saad Hamza.
The study aims to evaluate gamma and alpha emitters in some grain samples in agricultural lands in Karbala governorate, as well as some imported samples available in Karbala markets. Specific activity levels of uranium, thorium and potassium (gamma emitters) are measured in grain samples using the NaI (Tl) detector. Determination of radon concentrations and calculation of effective contact with radium and uranium concentrations (alpha emitters) in the same grain samples using the CR-39 detector developed by TASL.
The study concluded that grain samples contain natural gamma and alpha emitters at different rates according to the type of grain and locations in Karbala Governorate. Iraq, in addition to the improvement of the data obtained in this study from the suitability of NaI (Tl) and SSNTDs techniques for such complex samples and to find the specific activity of uranium And thorium in all grain samples within the world according to UNSEAR 2008, and that some samples had values of potassium specific activity greater than global activity according to UNSEAR 2008, the results of alpha emitters such as concentrations of radon, radium and uranium in all samples within the permissible limit according to To WHO, EPA and ICRP, annual effective dose data from gamma and alpha emitters in most samples are below the acceptable limit, and radium equivalent and internal hazard index values in all samples within the world according to the OECD and UNSEAR 2000 and the cancer risk factor due to gamma and alpha emitters in all samples is less than the acceptable limit. Using the T-test program statistically, it was found that Strong positive plate The natural radioactivity of the specific activity of uranium, thorium, and potassium, and the concentrations of radon, radium and uranium in most grain samples do not lead to significant changes in the internal radiation dose and are safe.
The study has recommended educating people with health knowledge of food and radioactivity of grains, as well as tracking radioactivity in grains at the borders before entering Iraq as well as in other governorates of Iraq and conducting periodic studies of radioactivity in grains using high-tech detection devices (HPGe) and other new technologies and studying levels of Radioactivity in other plants cultivated in Karbala Governorate Completing the radiological map, and issuing instructions to all farmers to reduce the use of chemical fertilizers with high radioactivity as much as possible.