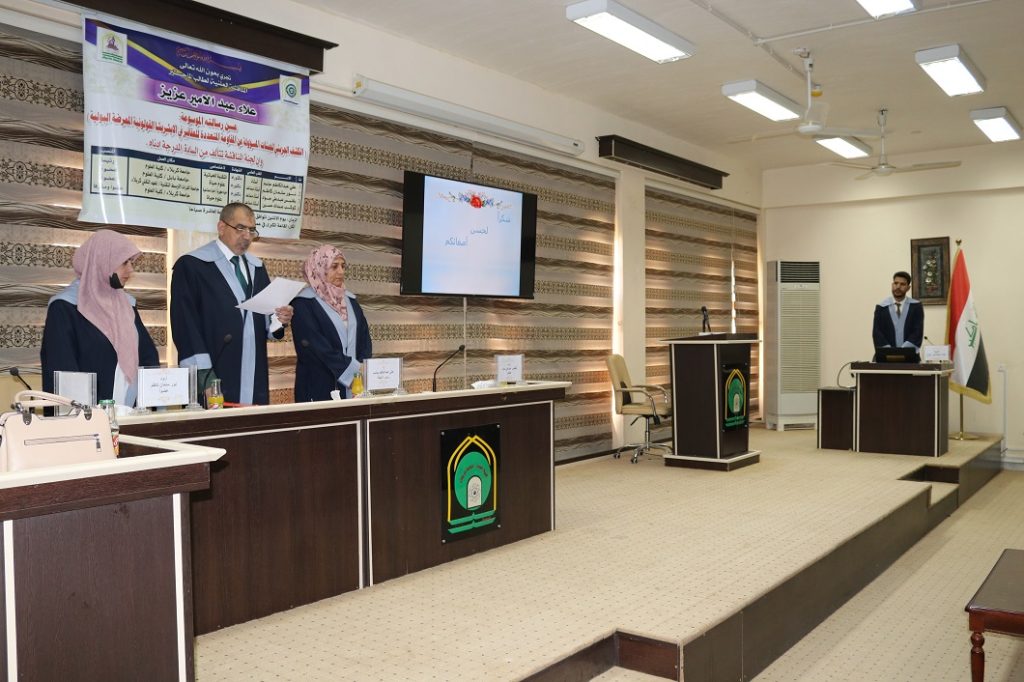 The Faculty of Science has discussed a master’s thesis about the molecular characterization of some virulence factors of Escherichia Coli bacteria isolated from urinary tract infections in the holy province of Karbala by the student Alaa Abdul-Amir Aziz.
The study aimed to clarify the investigation of the infection rates of this bacterium with multiple resistance to antibiotics through the molecular detection of some genes responsible for the virulence of Uropathogenic Escherichia Coli bacteria that cause acute urinary tract infection for patients in Karbala Governorate. as well as, addressing aspects of isolation and diagnosis of E.coli. From patients with acute urinary tract infections and investigation of the susceptibility of E. coli to biofilm formation and sensitivity of E. coli bacteria that cause urinary tract infections to antibiotics, and detection of virulence genes such as CsgA and TosA genes and integrons associated with multidrug resistance. Pharmacokinetics and clarification of the DNA sequencing procedure for the tosA gene.
The study concluded the conclusions of the emergence of a high percentage of isolates of E. coli bacteria with strong resistance to antibiotics, which reflects the unstudied use of antibiotics in the treatment of infections caused by these bacteria in the Holy Karbala Governorate. In addition, is to the appearance of a high percentage of isolates of biofilm-forming E.coli bacteria. To the extent of the virulence of these isolates and that E.coli isolates were virulent by possessing the genes tosA, csg A, and integrin class 1 that encode virulence elements in these bacteria. Regarding the protein produced by this gene, this is called a silent mutation.
The study has recommended the recommendations to conduct several studies to reveal the reasons for the increased resistance of E. coli bacteria isolated from urinary tract infections to antibiotics by revealing the antibiotic resistance genes, especially the genes responsible for encoding virulence factors. As well as spreading health awareness among citizens about the use of antibiotics Without consulting the doctor, to prevent the emergence of resistant bacterial strains and study the gene expression of resistance genes encoded by proteins of virulence elements by adopting .real time PCR technology.